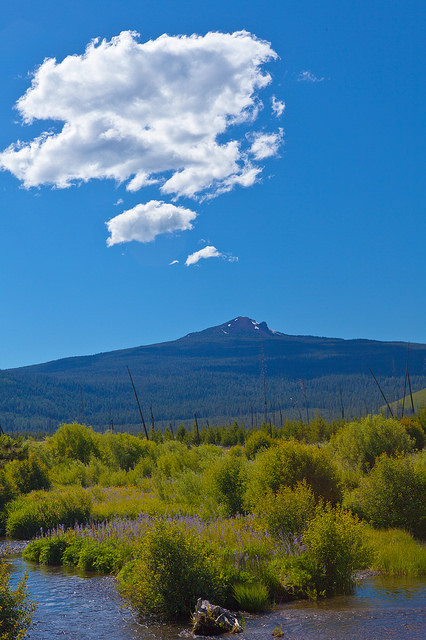 don't call this an update

I've been light on posts lately, but I'm still alive. Last weekend my folks were in town and we went over to Bend for a few days. We happened to catch the annual Pole Pedal Paddle where contestants punish themselves with a few intense hours of skiing (both kinds), biking, kayaking, and running. I found a great first person account of the event at someone's blog: Pole Pedal Paddle. What I liked about PPP is that it turned largely solitary activities like kayaking, skiing, and running into a communal event. You wouldn't always want to kayak with hundreds of other people, but once a year it builds community. As I watched I thought about communal events in the virtual world, but couldn't come up with too many. In the early blogging days there was A Day Without Weblogs (now Link & Think) every year. But maybe weblogs are communal enough already so an annual group activity isn't necessary.

The scenic highlight of the Bend trip was Tumalo Falls: Unfortunately, the Cascade Lakes highway is still covered with snow—which we found out the hard way. But the road to Tumalo Falls had just opened, and the falls is probably at its peak this time of year. There's a short path that lets you walk up to and look over the falls.

We saw plenty of these little guys at the Lava Lands Visitor Center: I also saw the Da Vinci Code while I was in Bend. The movie is being universally panned, but I actually enjoyed it. (Maybe because I haven't read the book.) I think I enjoyed it because the hero of the story is a history professor. At one point in the film they're rushing through a city being chased by bad guys and Tom Hanks actually says, "I need to get to a library, quick!" Not your typical action hero line. We need more movies where knowledge is a more useful tool to the hero than a gun.
May 25th, 2006, 1:26 pm
Paul Bausch
Showing 1 through 3 of 3 posts tagged bend.