antonhowes
Age of Invention: Where Be Dragons?
Is D&D an idea behind its time?

"Physically, there was nothing that actually stopped the invention of such games centuries or even millennia earlier. It required no special level of science, skill, or materials. So why did it take so long?"

After taking the summer off, my D&D group is gearing up to play again so I've been gathering links. Here are some that I've found useful recently:
Thoughts · Oct 6th, 2019, 11:44 am
Paul Bausch 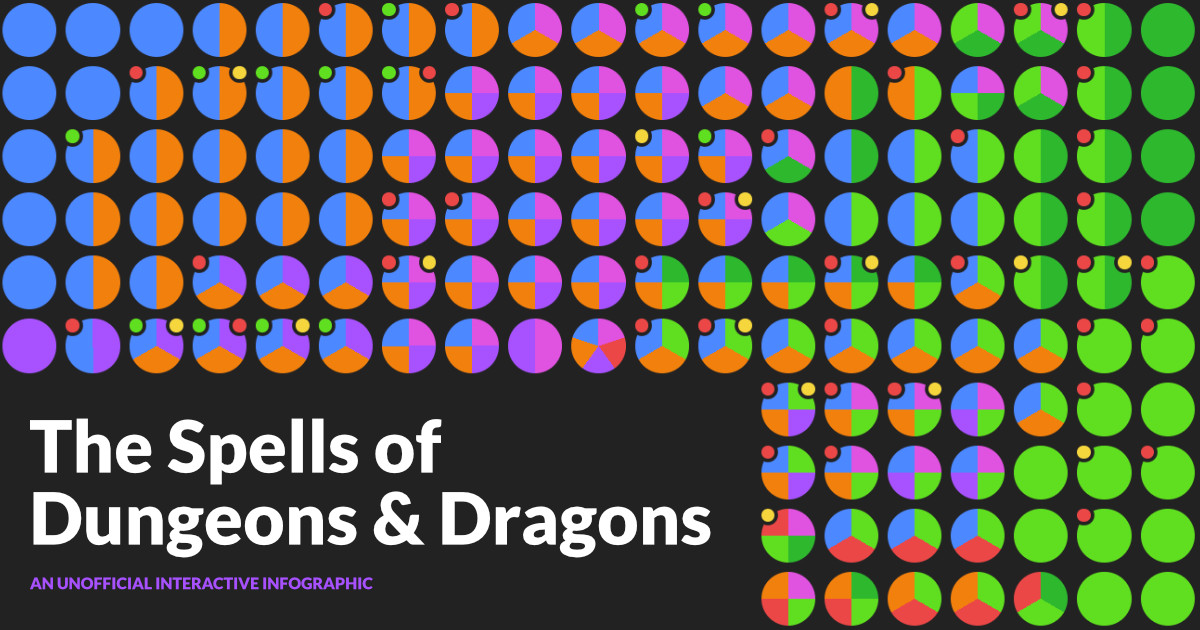 The Spells of D&D 5e
How many sorcerer spells overlap with wizard spells? Which spells are unique to rangers? These questions and more are answered in this nifty visualization.
Recommended · Sep 7th, 2019, 10:07 am
Paul Bausch

PCalc
About Dice by PCalc
I’ve been having fun with this 3D animated dice-rolling app. Seems like it’ll be good for all of my RPG needs especially those rare times I need to roll a bunch like 10d6 or 12d8. (This is a picture of a roll with advantage—a nice built in feature.) 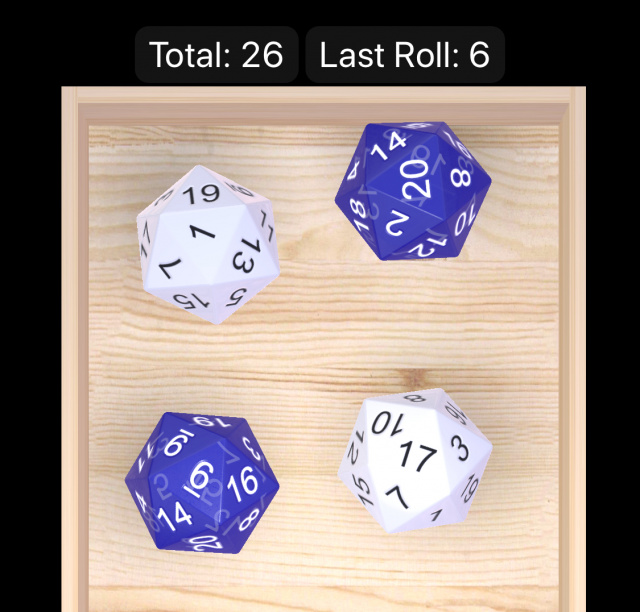 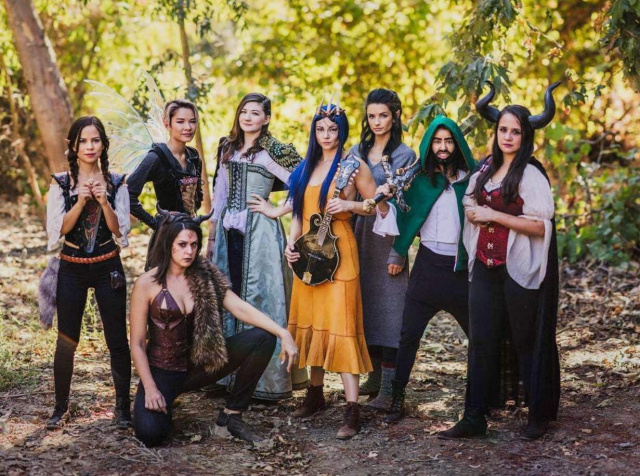 How Dungeons & Dragons somehow became more popular than ever
There are many reasons D&D is having a cultural moment and this article mentions a few. I think the game design decision to use more gender inclusive language and imagery in the 5th edition has been a big part of it.
Recommended · Apr 21st, 2019, 7:01 am
Paul Bausch 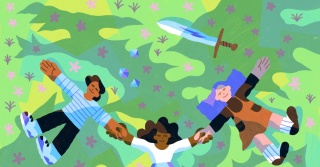 Why the Cool Kids Are Playing Dungeons & Dragons
Thanks a lot gray lady, you calling D&D cool officially makes it uncool! aw, who am I kidding—it was never cool and I wouldn’t have it any other way. *ruffles D&D’s hair*
Recommended · Apr 8th, 2019, 9:05 pm
Paul Bausch
www.markfickett.com 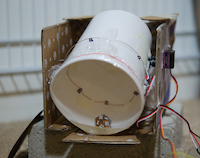 Mark Fickett Art: Dice Roller
If you're like me you've spent way too much time talking about the true randomness of dice with gaming friends. The conversation always turns to automating dice rolls via robotics, cameras, computer vision, compiling results, and haha yeah, that'd be great. The talk is always theory because it would require serious dedication to actually pull it off. Well someone did it and it is as glorious as I thought it would be. How fair are D&D dice? Not very fair, it seems, but the real destination here is the journey.
Recommended · Feb 26th, 2019, 7:08 pm
Paul Bausch

Dungeons & Dragons: Art & Arcana
I got this fun nostalgia bomb of a book as a Christmas present. It includes the visual history of iconic D&D monsters, campaign settings, and pop culture crossovers. I'm probably the target market. I grew up in the 80s playing this game and I play the latest version today. Seeing the evolution of the game over time is fascinating.

Best Games of the Year

This is my completely arbitrary take on my favorite games from this year. Specifically, Curse of Strahd which my game group has been playing for all of 2018 and probably most of 2017. It has a good balance of role-playing, puzzles, and fighting and the atmosphere is just different enough from the default D&D world to keep you guessing without feeling completely foreign. I've had a lot of fun playing Blood Rage lately. It's set in the land of Norse myth and at first glance it looks and sounds like a classic player vs. player fighting for area control game—and it is that! But there's a surprising amount of strategy involved. There are some great mechanics around losing area control which makes it tough to know how to block other players. It's a great combination of analysis and action. Root is another very different kind of area control game. It has asymmetrical play which means each player is using different mechanics to get victory points. It takes some getting used to and I had to play through a game before I even started thinking about how to optimize my turn. Having an experienced Root player on hand to answer questions is also a plus. Once you make it though those barriers, the game has a lot of turns and surprises and gives you a lot to think about. I found myself going over potential Root strategies days after playing. The classics are classics for a reason. I played a lot of Settlers of Catan this year because it's my family's favorite game. Even kids who can't read can get the hang of Catan pretty quickly. It's also a great way to introduce someone to Eurogames if their only experience with board games is Monopoly and Scrabble. (Which are fun too but not the full spectrum of what's possible!) A friend brought a self-printed DIY version of The Mind to a game night because he'd heard it was popular in Germany and there wasn't a way to get a copy in the US. We played this weird game where you put cards in numeric order with sly communication and luck and we were genuinely cheering our successes. I'm not sure it counts as a game, but whatever it is it's dramatic and everyone has fun. I've been having fun playing KeyForge with my son as a nice change of pace (for me) from Magic. KeyForge has a clever design where every deck has a unique set of cards and is evenly matched against other decks. The deck names are algorithmically generated, sometimes with humorous results. It is a nicely designed resource-gathering game where you can use cards without an energy-style mechanic. It feels a lot lighter than Magic but it has some complexity with different styles of play (fighting vs. stealing vs. spells) possible through the different factions. If you think you'd enjoy Magic without the deck building/collecting aspects you'll probably enjoy KeyForge.

I'm in Portland for XOXO 2018—a fun conference that pulls together indie artists to show their work and talk about their process. It's also a way for a bunch of people (like me!) who appreciate the weird web to get together and be socially awkward together.

This year XOXO got together with Chicago's LevelEater D&D events to ask this confluence of nerds to raise money for charity by playing Dungeons & Dragons. How do you raise money by playing D&D? It's a simple process: 1.) You get a space to play. 2.) You get some celebrity DMs. 3.) You get maybe a dozen volunteer DMs. 4.) You get someone to write a custom adventure for the event, along with fabricated props. 5.) You get people pay to play at tables of six and buy imaginary magic items to use in the adventure. 6.) And then everyone rolls some dice and goofs around for a few hours.

That's not easy to pull off if you didn't catch the sarcasm. I did this yesterday and it was a great time! I got to play with a personal hero of mine Patrick Rothfuss (site still rockin' ASP!) and give money to MyMusicRx in the process. The venue was an amazing music studio in Portland run by Decemberists guitarist Chris Funk who was there manning the front door, grabbing drinks for folks, and showing people around. The place was decked out in full fantasy regalia—here are a few pics. 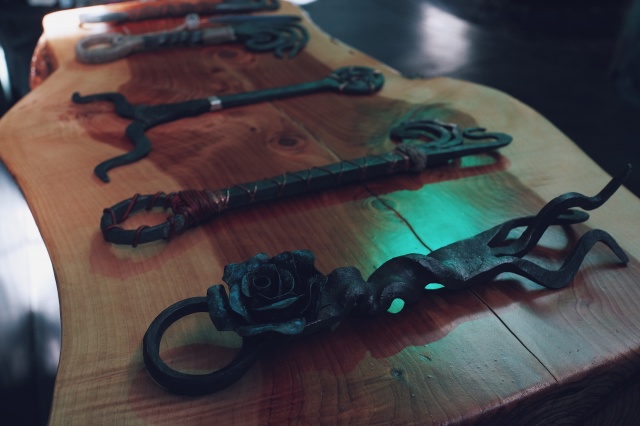 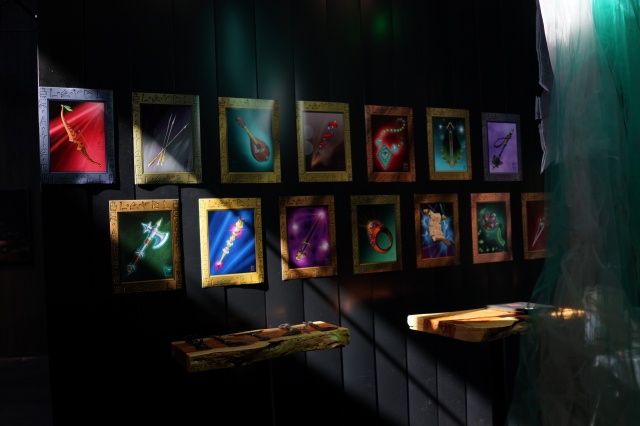 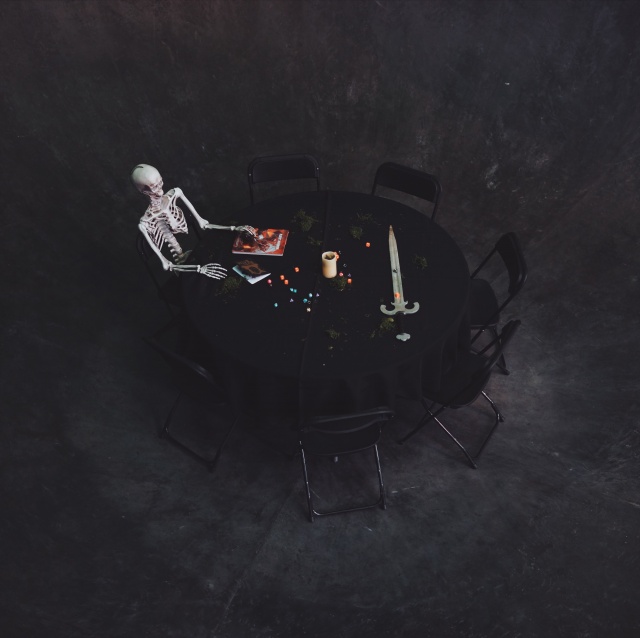 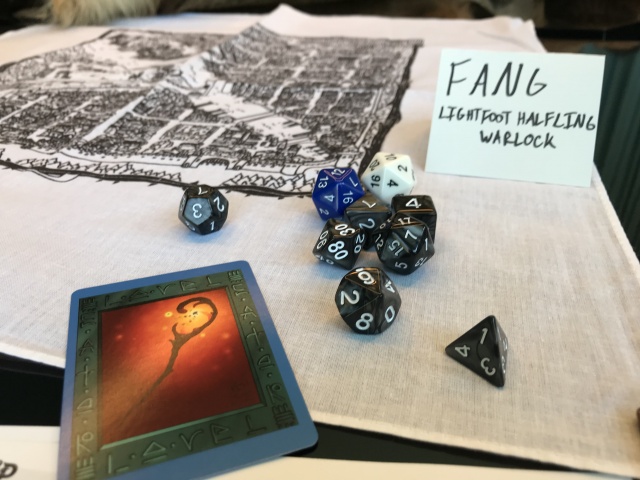 I'm really happy XOXO collaborated on this. It was epic fun!

The conference continued that night and I saw some fantastic film & animation projects I hadn't seen before. Graham Annable's Grickle is dark and hilarious if you're a pessimist like me. Do not miss Principal Skeleton. By the way, the venue is HUGE this year: 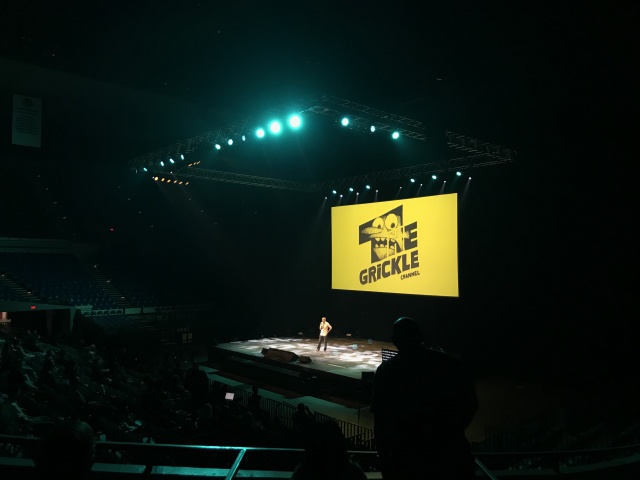 I also saw some fun card games, video games, and heard an inspiring talk from CSS artist Diana Smith. Her purecss-francine is a herculean effort.

It's a lot to take in! I'm glad XOXO is back advocating for indie work, creating amazing personal experiences, and being a good ambassador for Portland. Thanks Andys!
Thoughts · Sep 8th, 2018, 9:41 am
Paul Bausch

Here are a couple summaries of the latest Mueller investigation indictments: @Baratunde reads through and Lawfare summarises.

These new developments make this article seem less like speculation and maybe it's time to speculate about How Life is Going to Change.

PSA: Remember Stylish the browser plugin that you might have installed that lets you change the look and feel of pages you visit? It's bad now. I exported my styles, uninstalled Stylish, and then imported them to Stylus. That should work until Stylus sells out.

No, YOU need this amazing retro keyboard based on a Hermes Rocket typewriter—not me. I don't have a keyboard problem.

I'm late on this one, but if you have any interest at all in Dungeons & Dragons you should hear Dinah explain it to Matt on his podcast Hobby Horse: Dinah Sanders rolls for initiative. She is the best ambassador I've heard yet for tabletop role playing and her joy is infectious. Go listen!

Also thought this was like something out of a D&D plot: How we discovered three poisonous books in our university library.
Thoughts · Jul 15th, 2018, 7:34 pm
Paul Bausch
« Older posts
Showing 1 through 12 of 16 posts tagged dnd.