oops. I think today's post on matt's site was supposed to go to our internal Pyra blog. We can't have nice things! ;)
Aug 31st, 2000, 10:40 am
Paul Bausch
ooh, I almost forgot the birthday pi
Aug 31st, 2000, 10:16 am
Paul Bausch
jason turned into a 27-year-old yesterday too.
Aug 31st, 2000, 10:07 am
Paul Bausch
the birthday haul: wee binoculars to take with me while hiking, a 58mm neutral density filter for two of my camera lenses (perfect for sunsets), a teeny tripod, a beautifully hand crafted jezebel postcard, snaps and fries, a pointer to this great portrait of Bertrand Russel, several nice virtual happy birthdays, various and sundry cash (thanks mom and dad) and prizes. Thanks everyone (especially skp!), it was a great birthday. :)
Aug 31st, 2000, 10:03 am
Paul Bausch
Today is my birthday. I'm 27. The same age that hendrix, morrison, joplin, and cobain died. Luckily I'm not addicted to any dangerous drugs. (does caffeine count?) Although I am living a rock-n-roll weblog lifestyle: coding by day, sleeping by night. just try to slow me down. you can't. I don't know the limits.
Aug 30th, 2000, 4:01 pm
Paul Bausch
I very rarely encounter peevish people. When I do, I remember this. (btw, isn't peevish a cool word?)
Aug 28th, 2000, 6:26 pm
Paul Bausch
Only 45 days until the presidential election. You'll need to register to have a voice. (Just a friendly civic reminder.)
Aug 28th, 2000, 4:09 pm
Paul Bausch

Aug 28th, 2000, 2:43 pm
Paul Bausch
This weekend I heard Ralph Nader speak in Hopland. He was speaking at SolFest, a Solar Energy festival put on by the folks at Real Goods. It was refreshing to hear a politician speak candidly about problems with our system. I should have pictures soon.
Aug 28th, 2000, 2:06 pm
Paul Bausch
I haven't posted for a while. I should.
Aug 25th, 2000, 2:07 pm
Paul Bausch
linking is not a crime.
Aug 23rd, 2000, 1:51 pm
Paul Bausch
It's great to see how many of those blogs created in the first months are still going. These early adopters had to put up with some growing pains over the last year...and we wouldn't all be celebrating a birthday today without their enthusiastic support.
Aug 23rd, 2000, 1:18 pm
Paul Bausch
Happy Birthday, Blogger. You're one today. Look how you've grown. Oh, the things you will do!
Aug 23rd, 2000, 12:49 pm
Paul Bausch
jake just let me know that ani difranco has new ep called Swing Set. It has six songs. It's probably worth the price for her rendition of Dylan's Hurricane. I haven't heard it yet. Where did I put my Napster?
Aug 23rd, 2000, 12:08 pm
Paul Bausch
I cross the golden gate bridge to get to the office. Today, I got up to the toll plaza with my arm out the window, holding a bridge ticket. The guy in the window sees my license plate and asks if I'm a nebraska husker fan. (yeah, I still have Nebraska plates on my car.) I say, "sure". And he launches into several disparaging jokes about my alma mater. And he just kept going! stopping traffic! "Is this legal," I was wondering. I had my ticket out...waving it in front of his face...he wouldn't take it until he was finished. And as I drove away he kept going, yelling at me as I zoomed off! It was all good natured fun. I think. go big red.
Aug 21st, 2000, 5:05 pm
Paul Bausch

interstice - a : a space that intervenes between things; especially : one between closely spaced things b : a gap or break in something generally continuous

interstitial - relating to or situated in the interstices

It seems that interstitial may be turning into another word for a flash-based "commercial" on the web....but no one wants to say the dreaded "c" word. so we have this monster. Try a search on google for interstitial, and you'll see what I mean. The promise of high bandwidth brings the promise of your favorite website interrupted every 15 minutes by a heavily branded flash animation. *shudder*

Aug 18th, 2000, 4:30 pm
Paul Bausch
ack! just when the little stand by my bed was down to three books, I add a bunch more. Here are some new ones in the queue: what a good consumer I am. It's a book glut. Make it stop!
Aug 18th, 2000, 1:17 pm
Paul Bausch
I used to write poems
about nothing
but poems.
Aug 18th, 2000, 9:44 am
Paul Bausch
maybe that was my first experience with what buddhists call a koan. maybe it was just confusion...but in a good way, if you know what I mean.
Aug 16th, 2000, 10:04 pm
Paul Bausch
I'm currently reading Zen and the Art of Motorcycle Maintenance by Robert Pirsig and was surprised to find one of my favorite questions in there. I first heard this question in a socialist literature class in college. I'm not sure in what context it was brought up. Anyway, this one question kept me up at night for a while trying to put things together for myself: Did Newton discover the laws of physics or invent them?
Aug 16th, 2000, 10:02 pm
Paul Bausch
meg translated the descriptions that go along with the clips.
Aug 16th, 2000, 11:18 am
Paul Bausch
Beto's PyrAdventures: Encuentros cercanos del tercer tipo con los Pyratas de Blogger. Fun home movies! I like the phrase Pyratas de Blogger. Thanks, Beto! (The only relics I could find from Beto's trip are these two photos from meg's cam.)
Aug 16th, 2000, 10:37 am
Paul Bausch
Matt pointed out this interview with Dave Eggers. It's great. I love his answer to the question about "keeping shit real". I've always wondered what that means. I think Eggers nails it: fashion.
Aug 16th, 2000, 9:29 am
Paul Bausch 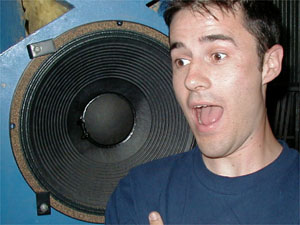 for those about to rock...
Aug 13th, 2000, 5:03 pm
Paul Bausch
skp: "I'm going to start living in the now tomorrow."
Aug 13th, 2000, 4:56 pm
Paul Bausch
Stephen Hawking has many of his public lectures online. One lecture starts out: "In this lecture, I would like to discuss whether time itself has a beginning, and whether it will have an end." So, ya know, if you need some light reading over the weekend, you might check this out.
Aug 11th, 2000, 2:49 pm
Paul Bausch
Hawking backs Gore: "The renowned Cambridge scientist Professor Stephen Hawking has videotaped a resounding endorsement of Al Gore, the presidential candidate, to be aired at the Democratic Party convention in Los Angeles next week." That's quite a different type of speaker from the pro wrestlers and country bands they had at the Republican convention. (ha.) Maybe the Democrats will have Green Day speak, or something, and it will all even out. ;) I saw Stephen Hawking speak in San Jose a few years ago...it was an amazing experience.
Aug 11th, 2000, 12:42 pm
Paul Bausch
test.
Aug 10th, 2000, 7:05 pm
Paul Bausch
I live in a silver mine, and I call it begger's tomb.
Aug 10th, 2000, 11:22 am
Paul Bausch
Napster, WTO, and Intellectual Property. oh my. [via rc3.org]
Aug 9th, 2000, 12:26 pm
Paul Bausch
The post before this one is dynamically included in this page via JavaScript. Ev pointed out how to do this today in the Blogger discussion forum. I customized the look with a little CSS action. nice. (now what am I going to syndicate?)
Aug 8th, 2000, 5:31 pm
Paul Bausch
Aug 8th, 2000, 5:30 pm
Paul Bausch
Hello bigfatradio listeners. Someone over there liked my eat_generator joke. They chose it as site of the day because they "...feel [it] to be the funniest, most informative or just plain weirdest on the web." Thanks! Rock on.
Aug 8th, 2000, 9:52 am
Paul Bausch
if you hear any noise, it's just me and the boys.
Aug 7th, 2000, 6:28 pm
Paul Bausch
Guster Claims It's Not Getting Paid Due To Its Onstage Comments At Rockfest. When will the kids learn that corporations aren't cool? Here's more about this in Guster's own words. (be sure to scroll down to the bottom of that page. hehe.)
Aug 7th, 2000, 1:32 pm
Paul Bausch

obsidian
Aug 6th, 2000, 10:42 pm
Paul Bausch
skp and I went for a hike today in Annadel State Park. The trail (Steve's S) was littered with obsidian. It's a shiny black volcanic rock that feels like glass – only harder. The Pomo Indians used to gather obsidian from the area to make arrowheads. At one point, we stopped on the trail to pick them up to study them. It was fun. It's great to be enthusiastic about rocks. I remembered that I used to have fun with rocks as a kid. When did I stop?
Aug 6th, 2000, 10:36 pm
Paul Bausch 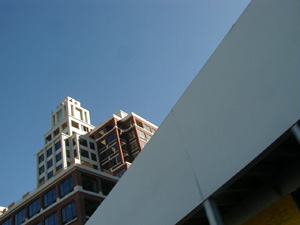 Aug 3rd, 2000, 8:12 am
Paul Bausch
On the long way home I listened to the republican national convention on NPR. I hope to see an article like this one in the paper tomorrow:

PHILADELPHIA, Aug. 2 -- The screaming didn't stop today at the republican national convention in Philadelphia, and it doesn't look like it's going to. As the vice-presidential nominee took the stage, the crowd was chanting "Go Dick, Go". But what he didn't realize was that they really wanted him to go. Instead, he started his politically charged speech, lulling the audience into a partisan frenzy.

One attendee (who whished to remain anonymous) said, "I had been cheering for two days straight, and I couldn't take any more. I knew something terrible was about to happen when he started his speech." Indeed it did. His plodding speech was stopped every three words or so for a burst of frenzied screaming and noisemaking.

"He was relentless," one onlooker whispered. "The third time he said 'spin the wheel, it's time for a change' I knew my voice was ready to go. But I had to cheer. It's the thing to do." He had to cheer. It was thing to do. Now he may never speak again.

The hooting and hollaring soon turned to coughing and gasping as the vice-presidential hopeful's dramatic pauses continued. The rallying cry for the party may be alive for the moment but, according to doctors, vocal cord damage can last a lifetime. "I can't believe the GOP could abuse their delegates like this," I said to myself.

"It was fun," one woman raspingly hissed, "I can't wait to do it again in four years." Then with the last ounce of her strength she screemed, "woo! woo! woohoo! woop, woop! USA! USA! USA!" And then I passed out.